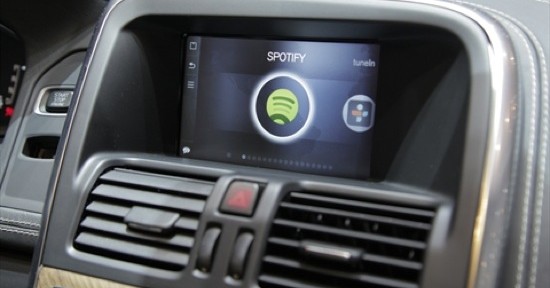 For people who like Volvo and also like music the news of the new partnership between Volvo and Spotify will be an exciting one.  They recently announced that going forward drivers will be able to stream music in cars fitted with the Sensus Connected Touch in-car Entertainment System.  The system works by streaming from your 3G/4G mobile phone or dongle and also have a voice activation feature keeping in line with hands free driving safety regulations. Spotify users already familiar with it’s interface and features will be able to enjoy their favorite tracks immediately in their vehicle.

It will form part of Volvo’s new Sense Connected Touch dashboard system which includes a 7-inch touchscreen. Volvo’s in-car tech system, also supports other Android apps including Google Maps and TuneIn Radio. It even has its own dedicated app store for updates. It can be fitted as a factory accessory in all new Volvo (V40, V40 Cross Country, S60, V60, XC60, V70, XC70 and S80) as well as being retrofitted in applicable used cars from model year 2011.

I wonder when it will be fitted as standard in Volvo Dump Trucks?… Nice thought!!